Summer fled New York after the murder of her best friend, hoping for peace. What she encounters in the town of Brattleboro is much worse.

Tommy Donagan was a police officer and a damned good one. Until he realized that most of the perps he picked up were released because the prisons were just too crowded to make the effort. It changed him. He was no longer the idealist cop that wanted to do good, but someone filled with rage boiling just under the surface. One night, that surface broke. He put a kid in ICU and rode a desk with IA investigating the incident. That didn’t work for Tommy so he turned in his badge and gun and waved goodbye to the precinct he’d called home. He chose to be a private investigator instead. After all, if he wasn’t responsible for the conviction, the rules could be bent when necessary. Enter the Whittaker family. They hire Tommy to find a small silver apple that was stolen from the family. They had a line on the apple, thinking they could retrieve it without outside help, but they failed and now they need Tommy to retrieve it. Tommy finds himself involved in something much bigger than a stolen property case when he discovers the apple is more than just a trinket and that there is more than one interested party involved in the theft. Between a host of suspects and a beautiful femme fatale in the form of Lily Whittaker, Tommy begins to believe he’s in over his head. The question is, can Tommy find the pieces in time or will he die trying to prevent the rise of evil?

Denying His Identity: Detective William West is proud of the work he does. Though his family is part of an ancient bloodline that makes him a Bestienmörder, he refuses to use his gift to eliminate the evil around him. With a strong sense of morality, he is proud to let the justice system do its work.

Defying Her Nature: Anna Bradford decided long ago that she would be a Gute Hexen and not a wicked witch. Though dark magic encircles the world, Anna lives in constant tension with the good magic she could do, and the dark magic that tempts her soul.

A grizzly crime brings William and Anna together on a case that soon leaves the realm of “normal” and leads them on a hunt for answers, for identity, for destiny, and for the chance at love. But will the darkness win? Or does love hold the light?

Lanie’s second novel, Lunae Lumen was released February 25, 2020 and is available on Amazon and Amazon Kindle. A vampire with a violent past. A Denver police detective searching for a serial killer. She’ll have to put aside her prejudice of everything he is to catch her killer, but can she do that and remain alive?

You can find Lunae Lumen HERE. Currently only $2.99! 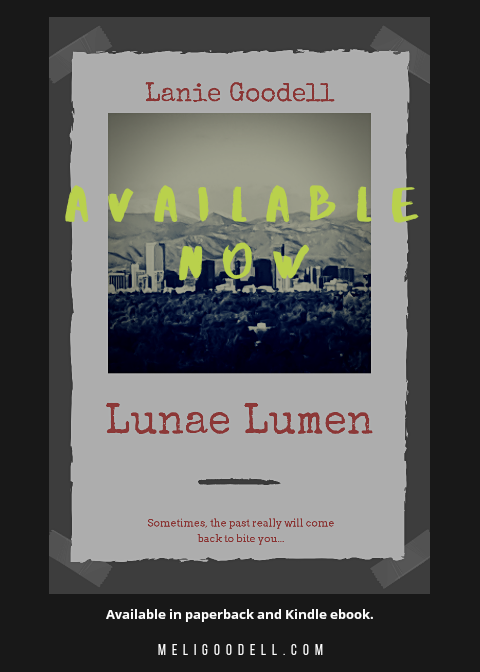 Click HERE to purchase Lanie’s debut novel, Salvagium. The chilling tale of a woman running from her nightmares, Salvagium will keep the reader on edge until the last page.

Lanie Goodell is an American author and single mother. She has recently returned to teaching as a substitute in her district with a certification in special ed. Lanie is currently studying to take the Praxis in hopes that she will one day teach at her son’s school. She is  an avid flash fiction fan and… END_OF_DOCUMENT_TOKEN_TO_BE_REPLACED